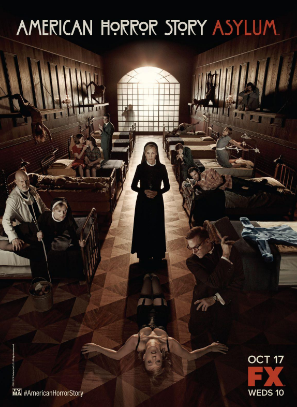 After the stellar performance of American Horror Story: Murder House, it seemed nearly impossible for the next season to measure up.   But when AHS: Asylum came around, the twisted series proved itself worthy, once again. This season is centered around a 1960’s asylum ran by a cult of nuns, led by the evil Sister Jude (Jessica Lange).  Jessica Lange is undoubtedly the star of the season, she immediately commands the screen with her presence.  Her character, despite evil and contorted, is strong and impressive.  AHS: Asylum torments its characters and the audience with stomach turning scenes. The storyline draws inspiration from serial killer Ed Gein. Josef Mengle and the horrific treatment of patients in insane asylums under the likes of Dr. Henry Cotton.  Despite the praises, we can’t overlook some of the flaws in the storyline, such as the introduction of certain side stories that were unnecessary and didn’t add much to the storyline, except for maybe confusion. All the same, AHS: Asylum effortlessly touches on all the great elements of a horror story which makes for a memorable season.