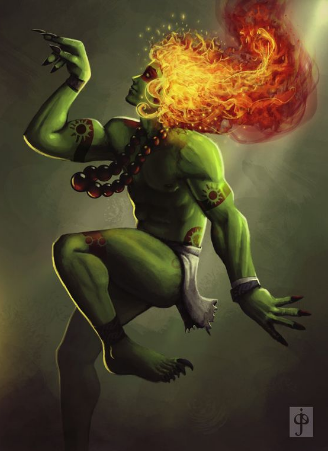 The Curupira is a creature of Brazilian folklore  that blends many features of European and West African fairies,  but is regarded as a demonic figure.  According to the legend, Curupira has red and orange hair and resembles a man, but its feet are turned backwards. The creature lives in the forests of Brazil, and uses its backward feet to create footprints that lead to its starting point, to confuse hunters and travelers.  It can also create illusions and produce a sound that’s like a high pitched whistle, in order to scare and drive its victim to madness.   Curupira preys on greedy poachers and hunters that take more than they need of the forest, and also attacks people who hunt animals that care for their offspring.