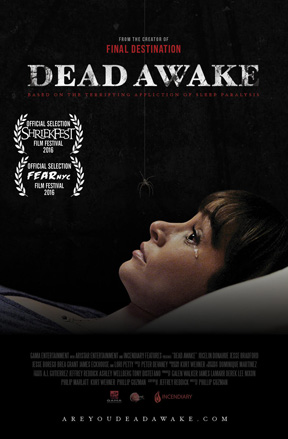 Dead Awake is by far the most sophisticated feature film to premiere at the 16th annual Shriekfest in Los Angeles. Written by the Jeffrey Reddick, the mastermind behind the Final Destination franchise, the film is based on the terrifying affliction of sleep paralysis. A young women must save herself and her friends from an ancient evil that stalks and kills its victims while they are in a paralyzed state. Dead Awake uses only a small amount of CGI which I appreciate because I can’t stand cheap animation. The film substitutes the lack of special effects with good acting, visually appealing cinematography and good direction thanks to Phillip Guzman, which is all a vital part of the the movie’s success. While the film works on almost all levels, there are a few minor adjustments I would have made. For one, the movie feels a little long and it can stand to benefit minus a few select scenes. I also feel that a darker tone would have created a more intense setting for both the characters in the movie and the audience alike. Other than this, Dead Awake is a fantastic independent horror flick that serves as a modern version of A Nightmare On Elm Street.