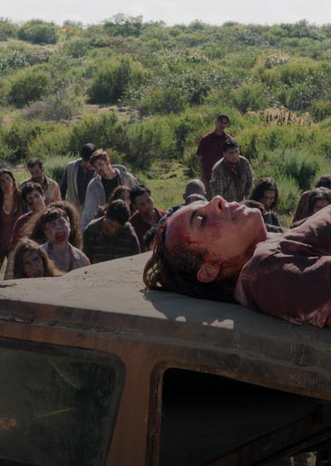 About half way through each episode of Fear The Walking Dead I always end up asking myself the same question; Why do I keep watching this show? The only thing I have come up with is because it serves as some sort of weak substitute for the The Walking Dead. I guess I’m just passing time until the real thing comes back in October. Grotesque (Season 2, Episode 8) was more of what we’ve come to expect from Fear; characters we can’t seem to rally behind, pushing their way through the daily troubles of living in a zombie infested world. The only reason this concept works in The Walking Dead is because we care about the characters and the writers have gone through great lengths to help us fall in love with every single one of the main cast members. Unfortunately this show seems to have rushed into the false assumption that we actually care about Nick and the gang enough to set through 45 minutes of nothing. This episode was completely forgettable. I recall Nick walking a long distance and doing a lot of nothing. What was the point? Why do we care?