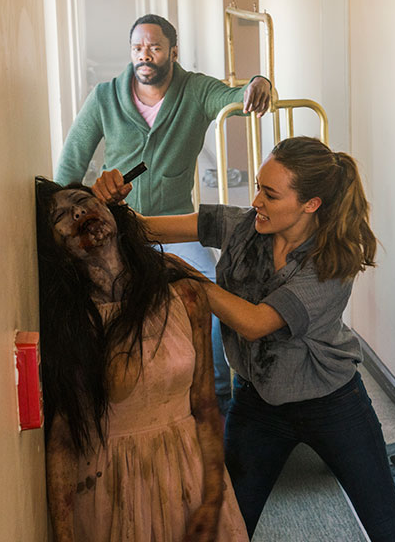 It’s unfortunate that Fear The Walking Dead was unable to build on the momentum built from last week. As I speculated last week, Nick’s story is much less interesting. I like his character, but his story is not compelling as a dominant point of focus. As soon as they start focusing on Nick and his newfound community I get bored again. I have to admit that his idea to stretch the drug supply was pretty genius, and the tension built when watching him, a junky, surrounded by bottles of Oxy is a nice touch, but the episode still falls short. I also enjoyed watching Alicia clear out the hotel with Victor and her mother, but I just can’t find the hook with their group. There’s nothing compelling. Nothing pulling us in. Victor is certainly a strong character, and Alicia is believable enough, but there is something about Madison that just doesn’t work. She comes across as a bit smug but her character hasn’t earned this as a forgivable characteristic. The writers are assuming that she will automatically be accepted as a hero and therefore forgive her smugness. Unfortunately without her actually being a hero, this characteristic just makes her unlikeable. I’m looking forward to getting back to Travis and Chris which was a much more interesting story.