Home FEATURE Get Out 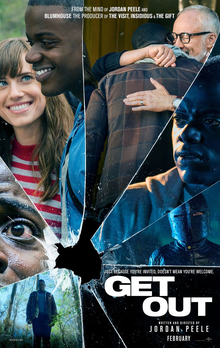 Get Out is the first bona fide horror movie hit of 2017 and its audience grew over time by word of mouth and solid reviews from critics everywhere and it’s easy to understand why.  Aside from being a creepy and disturbing flick from the get go, it was shot well, the acting was spot on and the story from first time director Jordan Peele was as much thought provoking as it was scary.  I loved this movie and caught Get Out in a second run theater on the eve of it appearing on digital platforms earlier in the spring.    Critically acclaimed horror movies worry me because they will usually fall into acceptable art house faire and be dull beyond repair.  Rest assured Get Out is neither dull, predictable or art house faire.    Peele’s directing debut is impressive and the slight bits of humor are downplayed because this isn’t a Wayans brothers parody going to for cheap laughs.  Daniel Kaluuya plays Chris Washington who’s dating Rose Armitage played by Allison Williams (from HBO’s Girls) and he starts to question what he’s getting himself into as they pack for a weekend with her parents in what the viewer assumes to be upstate New York or southern Connecticut.  Upon arrival things seem to be a bit askew with dinner guests at Rose’s parents’ annual get together showing an unnerving interest in Chris.  He sort of dismisses it even though he finds it strange.  Rose convinces him it’s all in his imagination even after meeting someone he thinks he recognizes from his neighborhood in the city.  During the party, things start to get weird and Chris notices something isn’t right with house staff, who happen to black but are acting in a way that are very similar to that of pod people from Invasion of the Body Snatchers.  After reaching his friend Rodney played by Lil Rel Howery on one of the final cell phone calls made before things get out of control, Chris realizes he in fact must get out.  Something isn’t right and as he convinces Rose they need to leave, a series of events occur thus proving his suspicions of something being amiss were 100 percent correct.  Get Out is as much a fantastic horror movie as it is solid study on race relations in the 21st century but I’d go so far to say it’s much more than that.  While it is both, it’s also one of the most entertaining movies I’ve seen in quite some time.  See official trailer here.