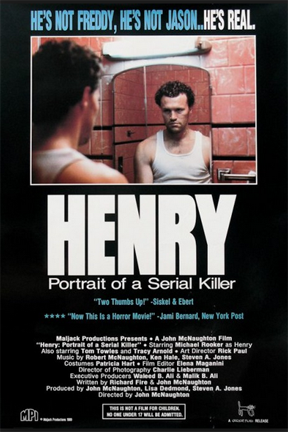 Henry: Portrait of A Serial Killer was initially released in 1986 and is currently in limited release for its 30th anniversary. I remember seeing this film in college when it was shown at midnight and it was kind of an underground event. While I didn’t remember much of this movie, thankfully, Henry: Portrait of A Serial Killer has retained its cult following and is back in limited release for its 30th anniversary. This is quite a disturbing chapter of American history based on the confessions of serial killer Henry Lee Lucas and is more fascinating now more than ever. It features the debut appearance of Michael Rooker, best known to horror fanatics for his recent starring role on AMC’s The Walking Dead. Henry follows the story of a drifter who seems to murder anyone he chooses for very little reason. The film centers around 3 main characters: Henry, Otis (who met Henry in jail) and Becky (Otis’ sister who he has incestuous feelings for). The scenes where all 3 are alone in the apartment are tense and brilliantly played. The minimal soundtrack adds to the atmosphere and at times the silence is deafening. Becky develops a crush on Henry and needless to say, it doesn’t end well. Henry: Portrait of A Serial Killer feels like a snuff film at times and it’s creepy throughout. It was shot on 16mm for very little money and what it lacked in budget it made up for in creativity with what seems like gritty guerilla shots and clever cinematography. Like most American cities in the late 70’s/early 80’s, Chicago looked like a dangerous place which served as the perfect setting with a look that can never be duplicated.  If I had to compare this movie to anything, it would be the equally disturbing I Spit On Your Grave from the same era. By the time Henry was released, the original Star Wars was 9 years old, Friday the 13 Part VI: Jason Lives had just been released and Michael Myers wasn’t due to return to theaters in another Halloween film for another 2 years. Step back in time with Henry: Portrait of A Serial Killer, it may not be the fastest moving horror movie, but it is certainly one of the most compelling.