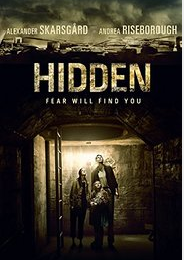 I hate to pass up a cheap rental on iTunes so I took a chance with Hidden and I was pleasantly surprised with this film. The film focuses on a family trapped in a bunker hiding from the Breathers, who lurk above ground and are hunting them.  Skarsgård (Ray),  does an amazing job and is very convincing in his role as a nurturing father who is very protective of his family and is prepared to fight off any creature in an effort to protect his daughter, Zoe (Alyn Lind).  The struggles of the characters are compelling and very real, you will find yourself identifying with them and empathizing with their situations as they fight back against the Breathers. Unlike other post apocalyptic stories this one has a major twist and will get you thinking as to how subterranean populations come to be after years of isolation.