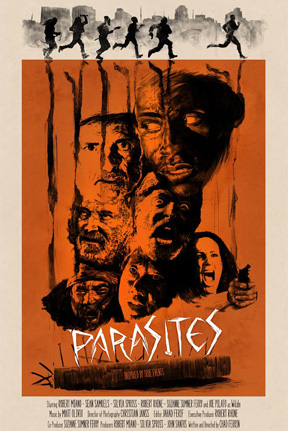 Parasites is a new film by Chad Ferrin that takes you on an adventure through the gritty underbelly of downtown Los Angeles. I was lucky enough to see a screening at Shriekfest 16 in Los Angeles on Friday, October 17. While the story focuses on a group of blood thirsty homeless maniacs on the hunt for a college student who is navigating his way through the lonely streets of downtown LA in the middle of the night, it is also a heavy handed social commentary. It highlights issues with the homeless and the disconnect between those who have too little and those who have too much. Parasites also drives home the ongoing epidemic of a predominant white police force at odds with the black community in a striking resemblance to the Black Lives Matter movement. The gritty streets of Downtown LA are magnified through the grainy film style that may or may not be due to a low budget, but either way this really works to the film’s advantage. A heavy use of synth music is reminiscent of 80’s era John Carpenter and the acting reminds me of a late night TV movie of the same era, both qualities work to the films advantage and disadvantage. I can attribute the grainy film quality and acting to artsy styling but the heavy social commentary borders on being too obvious. The ending is rather predictable within the first 20 minutes and yet the filmmakers went to great lengths to pepper the entire script with almost every racial slur your can imagine. Parasites is fun, gritty, energetic and certainly worth checking out and it borders on low-budget in a way that I can certainly enjoy.