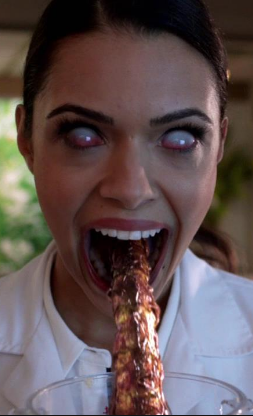 Peruvian legend has it that Pishtaco (also known as Kharisiri), is a parasitic evil monster of European descent that roams in the Andes and preys on the natives.  The monster has a human appearance with a proboscis appendage with a sucker at the end.  The proboscis, which is hidden in their mouth, is released during feeding.  Unlike the traditional vampire, the Pishtaco sucks the fat from it victims, which does not necessarily kill the victim unless the Pishtaco is unable to control itself and sucks to much fat. The legend dates back to the Spanish conquest of South America in which the Europeans conquered the people of Peru by torturing, killing and enslaving them.  In Supernatural, they featured the Pishtaco (pictured above), but the monsters are portrayed by Latino characters which defeats the entire purpose of the legend.