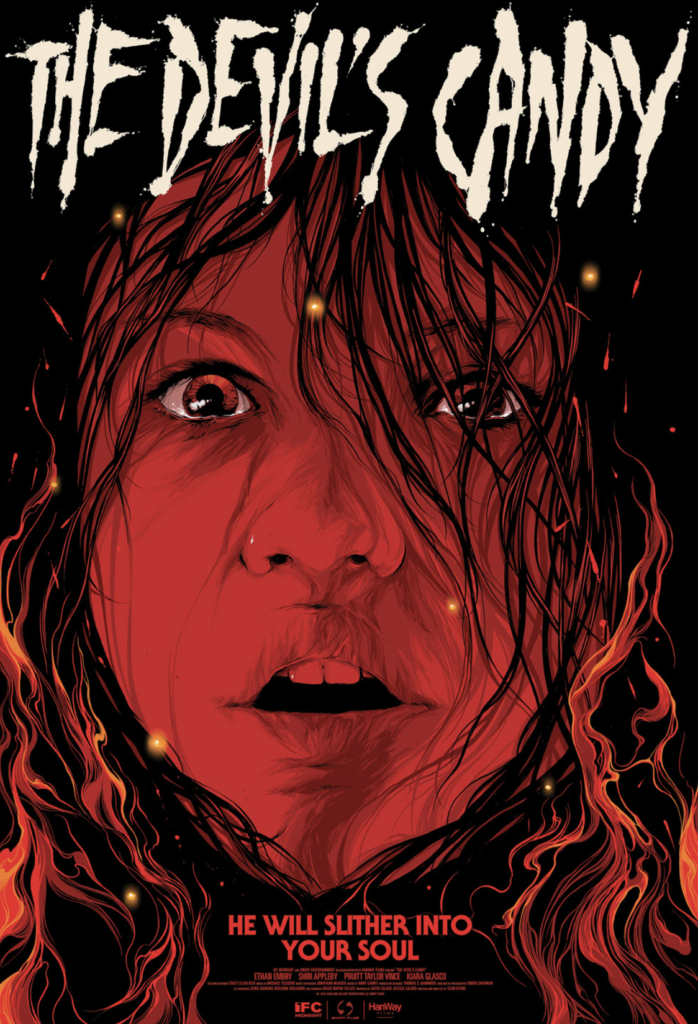 The Devils Candy, written and directed by Sean Byrean. This film is about a struggling painter and his family who move into a new house, which seems to be in the middle of nowhere. Main Character Jesse Hillman played by Ethan Embry begins to hear strange voices in his home, then suddenly his painting changes from gentle butterflies to disturbing images of children screaming and burning in hell fire. Jesse Hillman becomes lost in his art forgetting of all time; to top it off there is a psychomachia killing young children with rocks. The Devils Candy has to be one of the best independent yet underrated horror films I  have seen in quite a while. The cinematography of this movie is ravishing; Sean Byrean directing is phenomenal. Each shot in an interesting one, the way each chapter fits into the frame is great; the lighting is fantastic everything about this film visually is gorgeous.

The Devils Candy is relatively a short film running about 75 minutes. Even though the movie is short, I was completely invested from beginning to end. The cast is also fantastic I can not express this enough. Ethan Embry portrays gritty and delivers an aggressive presence due to his obsession with his art. Karia Glasco the daughter of Jesse Hillman(Ethan Embry) and Astrid Hillman( Shiri Appleby) her performance is incredible you come invested In this girl, and when she’s placed in danger, you are rooting for her to make it out alive. Pruitt Taylor Vince performance as Ray Smilie is jaw dropping, typically an over looked actor he flourishes in this film. Taylor’s acting is disturbing every time he steps into the scene the ambiance changes; becoming excruciating uncomfortable and fearful. The Devils Candy is a brilliant and unsettling film, and I can’t wait to see more horror from Sean Byrean. See the Trailer here https://www.youtube.com/watch?v=rtD3M86ZqDA