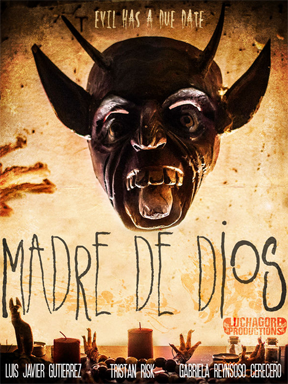 Madre De Dios is what the Spanish refer to as the Mother of God or The Virgin Mary. A woman awakes at what appears to a be a satanic ritual and is being held captive by two elderly witches who are using the women as a vessel to give birth to the anti-christ. Madre De Dios definitely does not hold back; exposing a full nude scene which is surprising given that nudity is rare in a short film, but it is used in good taste and with purpose. The special effects are what really make it stand out and are extremely realistic. The attention to detail in the character’s face makeup is very significant to the story; showing scars on the witches faces adds character and backstory of previous rituals. It is techniques like this that really bring a character and story to life. The performance by Luis Javier Gutiérrez (El Brujo) and Gabriela Reynoso Cerecero (La Bruja) was phenomenal. Their acting elevate the film to an entirely new level of authenticity. Madre De Dios is prodigious and it is no surprise that it won varies awards for best short film.