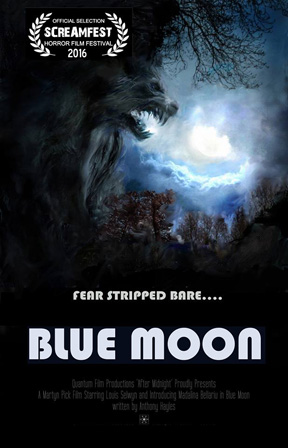 Sex & violence have co-existed in the horror genre from day one, from the shower scene in Alfred Hitchcock’s Psycho to the seductive powers of early Dracula. This all seems obviously acceptable for a modern day horror film, but unfortunately the short film Blue Moon seems to come across as raunchy in all the wrong ways. By my count there are three ways to go about sex and horror in order keep the interest of your audience. The first is you simply treat sex as a natural part of the story which leads to 2 people being alone and vulnerable. The second is to take it over the top in a gratuitous and almost comical display of ridiculousness that is obviously in jest. The third, and most difficult to watch is through assault, trafficking and/or sex work. Blue Moon blurs the line between sex work and comedy, or perhaps it simply fails at holding the line at sex work and tilts toward comedy due to poor execution. The acting is forced, the nudity is awkward, and the attempted comedy seems misplaced. I think Blue Moon should have gone with being intentionally over the top and ridiculous but instead it just comes across that way.