Home FEATURE Day Of The Dead in San Francisco

Day Of The Dead in San Francisco 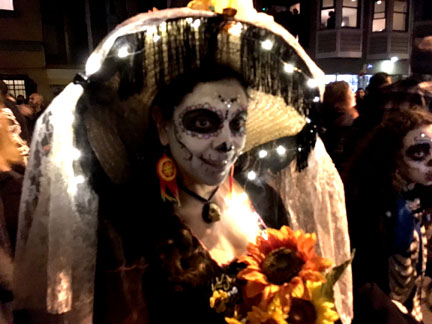 Dia de los Muertos (Day of the Dead) is a traditional Meso-American holiday that has been celebrated throughout Mexico for centuries. It is part of a multi-day holiday that begins on October 31st with All Hallows Eve, continues into November 1st with All Souls Day and then ends on November 2nd with All Souls Day, also known as Dia de los Muertos. Scholars trace the origins to indigenous observances dating back to an Aztec festival dedicated to goddess Mictecacihuatl. Dia de los Muertos honors both death and the cycle of life when neighbors gather in local cemeteries and public areas to share food, music and memories with each other and with our ancestors and loved ones who have passed away.

The Day of the Dead has been celebrated in San Francisco’s Mission District for the past 50 years. Each year on November 2nd the city comes together to celebrate those we have lost. Streets are closed while a procession of thousands walk down Bryant from 22nd to 24th and then up 24th to Mission. Public altars to honor the dead are constructed and displayed in Garfield Park at 26th and Harrison.

The procession is peppered with groups of musicians, drummers, artists and dancers who are performing among the thousands of spectators who are all happy to be part of something so spectacular. Large groups of drummers march to an ancient beat of pounding drums followed by groups of traditional Aztec dancers. Giant skeleton heads displayed on trailers slowly pass followed by a melancholy chorus ensemble. Thousands of people with traditional Dia de los Muertos face paint crowd the streets with the thick smell of burning sage in the air.

Many people carry pictures of loved ones who have passed. Some push entire altars that they have constructed in memory of someone they love. Others just carry with them a fond memory of a brother, a sister, mom, dad or a friend who is no longer with us. While it may seem odd to some to celebrate in honor of the dead, this traditional holiday that is celebrated throughout Mexico continues to go strong in San Francisco and this past November 2nd was no exception.