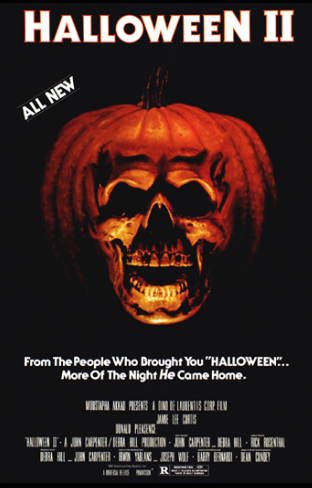 #13 – Counting Down 31 Horror Movies to Watch in October:

Picking up right where the first HALLOWEEN left off, HALLOWEEN II continues the story of the night HE came home. The notorious Michael Myers is still alive. Dr. Loomis, shouting “I shot him six times…I shot him in the heart…” tries to convince town sheriff Brackett that the monster is still on the loose. Meanwhile, seventeen year old Laurie Strode has been taken to Haddonfield Memorial Hospital.

After Loomis and Brackett find a trail that leads to the local elementary school, Marion Chambers (the nurse who accompanied Dr. Loomis in the first film) informs Dr. Loomis that by order of the governor, he is to return to Smith’s Grove, and leave Myers for the police.

Meanwhile, Myers has been on a rampage at the hospital. Killing each victim slowly, Myers makes his way through Mr. Garrett, the night watchman, Bud the ambulance driver, nurses Jill, Karen, Janet, and Mrs. Alves, and even the drunken Dr. Mixter. Laurie is left alone in the hospital with Jimmy, an orderly who has taken interest in the young woman.