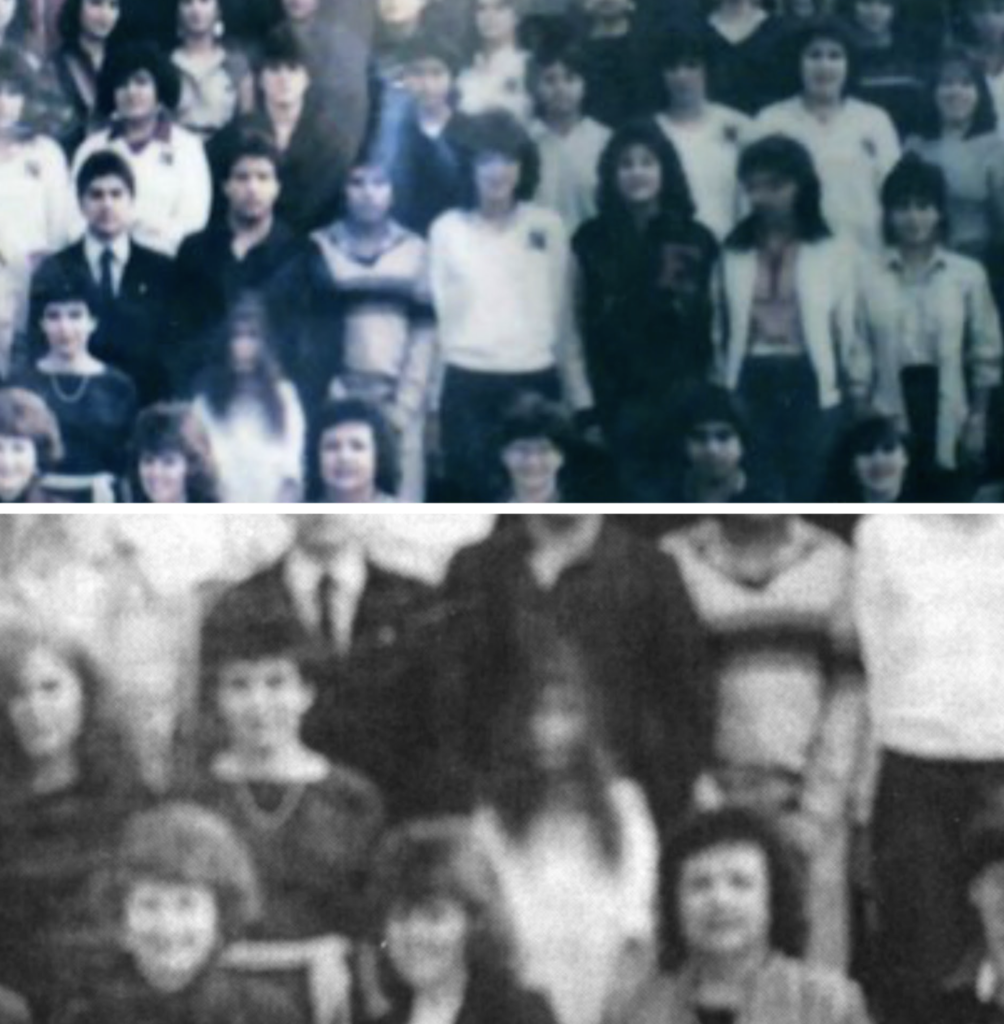 Returning back to school can be a frightful experience for all incoming students. Now imagine entering a new school with halls filled with mist, ghosts, and secret tunnels. El Paso High School is one of the oldest operating High schools in Texas built in 1916. Labeled as the “Lady on The Hill” this high school houses the spirit of young women who wander the halls and students have reportedly seen a lady wearing white jumping off the balcony of the school. This particular paranormal activity seems to be caused by a rumored unfortunate event that occurred over 30 years ago when a female teenage student slit her wrists and jumped off the high school balcony.There is evidence of the ghostly figure in the famous El Paso high school yearbook photo of the class of 1985. An unclear image of women dressed in a white stands beside fellow classmates or so we think. To this day no one has been able to identify who this young woman is, but she certainly fits the description of the girl who wonders the long dark halls of the school.

Not only does the school house spirits of the dead, El Paso High also has secrets of its own buried between its walls. Various teachers have discovered eroding brick walls exposing hidden dark tunnels leading to enclosed classrooms. There have even been situations where the emptied halls are filled with a thick mist for no particular reason. Trevor a faculty member at El Paso high shared his and his co workers various paranormal experience when interviewed by Ken Hudnall. According to  Trevor, Angelo Plecluda the Journalism Instructor at El Paso High would stay the long night with journalist and yearbook students to produce a first class yearbook. At 11 o’clock Angelo Plecluda locked up his classroom and was walking towards the exit when he saw women lit by the red exit sign. She was dressed in a 1950s blue chiffon prom dress.  As Plecluda began to walk in her direction the ghostly figure looked directly at him and noticed she was floating above the ground.  With every step, he took women began to become more and more transparent eventually vanishing into thin air.  Trevor even shared the story of the day he and several other teachers found the secret tunnels of the school.  “Several of the teachers crawled through a small opening eventually coming to a brick wall that blocked the tunnel. The bricks were old and the cement between them was crumbling, but it was clear that these bricks had been added long after the surrounding brickwork. Curious, one of the teachers pushed on the newer bricks until some gave way, revealing a large dark cavity”. the teachers had discovered an old abandoned class room. Inside the classroom, Trevor and his co workers were amazed by what they saw. The classroom was in perfect condition; the desks were aligned in rows with note book placed directly on top. Trevor continued to explain his discovering stating “There were Baby Ruth candy bar wrappers on the floor from a time this product sold for 5 cents as well as numerous 5-cent coke bottles. In one of the student notebooks lying on a desk, they found, in addition to algebra notes and completed problems, a very racy love letter from the owner of the book to a boy”. It seems as if the classroom was once in use, but the students left and never returned. There is no doubt that El Paso High School in haunted with a dozen of unexplainable events taking place on this campus, so when you are complaining about returning to school be thankful a woman in a white dress isn’t waiting for you at the school’s entrance.