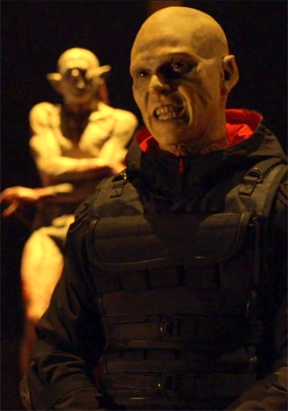 OK, not quite as interesting this week but still a strong showing. Things have certainly changed for our characters now that the master is assumed to be dead. Fet is ready to celebrate while Eph is still concerned that something does not seem quite right. For one, Quinlan is not dead which is supposed to be an unfortunate side-effect of killing the master, and also the strigoi are acting more erratically and unpredictable. Quinlan is less involved this week which was a bit of a bummer, but Dutch comes crawling back into the picture, which I’m still on the fence about. Setrakian is beginning to get annoying with a tunnel vision fixation on that damn book, which really is not an interesting part of the story. Hopefully it becomes a key pivotal point in winning the battle against the strigoi, but in the meantime I’d like to see less of Setrakian and the book, and more of Quinlan, the master, the ancients, and those cool strigoi soldier dudes.