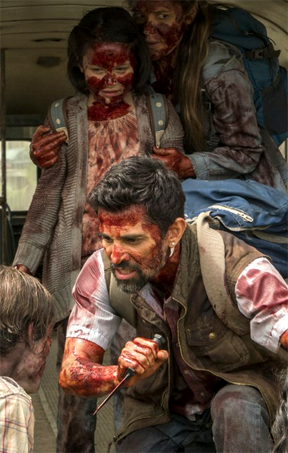 This episode was incredibly weak. Granted, it had a few powerful moments, but they were quick to fade away into boring side stories and overly dramatic scenes about nothing. The rogue family that has run off from Nick’s colony sparks a few questions about what’s really going on there, but the reality is, why do we care? What has this story given us to really care about when it comes to the colony? And why the sudden interest in Ofelia? She’s running off and daydreaming about her long lost finance, but why build her up when we have already forgotten that she even exists? One thing that stood out in glaring contrast to past episodes was the choice of music this week. TWD has always had a strong sense of music set against a great story, but up until now we haven’t really heard any great music on FTWD. Maybe this subtle difference in creative detail is a small indication that we will start seeing improvements in the story as well, but I’m betting not. The strongest moment is when Victor runs into a critical health issue (putting it lightly) which prompts Madison to stand up and take charge. This may give Madison a platform to become a believable leader and earn respect from the viewing audience… time will tell. The ending scene circles back to where we left off with Travis and Chris, which I have to admit I’ve been a bit curious about. What did Travis decide to do about his crazy offspring?