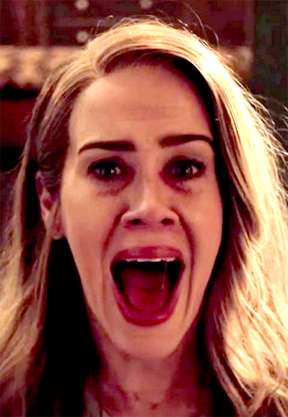 September 14 brought the premier of the most anticipated show of the fall season, American Horror Story: My Roanoke Nightmare. With a series of teasers roaming the internet, pulling and tugging at our curiosity we couldn’t help but wonder what the theme of season 6 was going to be. Alien children and exorcisms were a few popular theories that were floating around, but boy were we wrong. Turns out American Horror Story has decided to take a more historical route with a season based on the “Roanoke Colony”, better known has the “Lost Colony”, which was one of the first English colonies in what is now North Carolina. This episode is a show within a show, and as confusing as this may seem it’s really quite simple. A couple is documented via a video diary as they share their personal experience living on the establishment of the Roanoke for a television program titled “My Roanoke Nightmare”. Their story is told through this video diary as well as what appears to be a reenactment of their experience. This episode has an abundance of suspense, horror and spine chilling scenes all within an hour and a half. I noticed an absence of huge stars such as Lady Gaga and Evan Peters, but it’s only the first episode so these celebrities are bound to show up sooner or later. The wait for American Horror Story Season 6 was definitely worth it with such amazing moments packed all into the first episode. We will all be counting down the days until episode 2 airing on September 24.