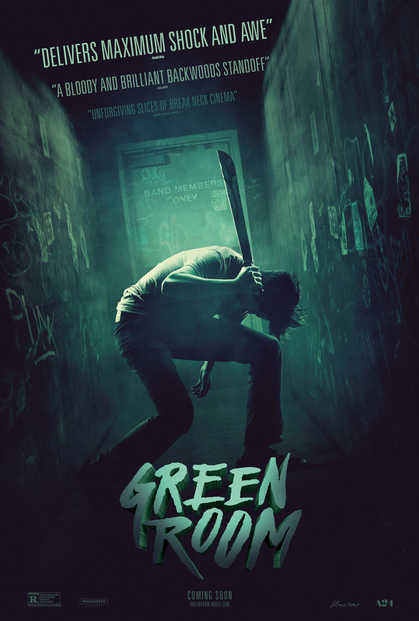 OK, full disclosure here… I was in a touring punk band for several years and I’m a HUGE fan of the eighties punk scene in general. So given that the premise of Green Room is centered around a touring punk band, I was hooked before I even started watching. The movie is riddled with references to all of my favorites such as Minor Threat, Fugazi, Dead Kennedys, etc.. So, even if this was a terrible movie, It would still be a must for many of us who just like seeing Minor Threat t-shirts and hearing punk reference in movies. It was certainly an added bonus that this was not a terrible movie at all. It was actually pretty damn good. A touring punk band plays a show at a white power club (why the hell would they play there in the first place?) in rural Oregon when all hell breaks loose. I think they made some ridiculous mistakes (as is commonplace in horror movies), but overall it was believable and incredibly intense. By far, the best performances were given by Patrick Stewart (Darcy) and Anton Yelchin (Pat). When writing this review I also discovered that Anton Yelchin recently passed away on June 19, 2016 at only 27 years old. We wish you the best in your next life Anton!