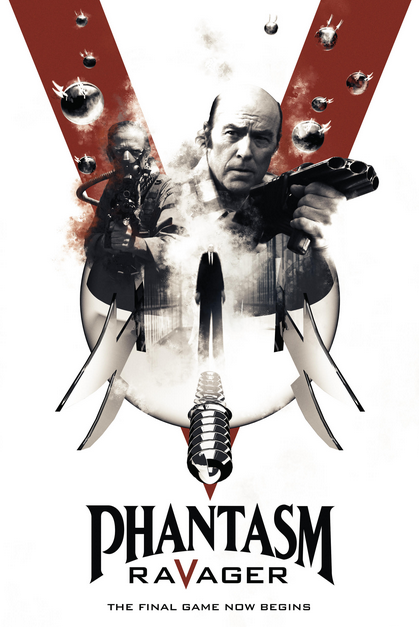 The original Phantasm pretty much freaked me out when I first saw it in 1979. It was released hot on the heels of the first Halloween and almost a year before the original Friday the 13th installment. The late 70’s and early 80’s were a glorious time for slasher movies but what set Phantasm apart was that it was not only horror, but also a good amount of sci-fi included in the story, similar to that of Hellraiser’s sci-fi connection. Aside from the first film, I never saw any of the other sequels, which probably leaves me a bit behind when watching Phantasm: Ravager, but not much. Much of the original cast from the first film and sequels appear in Ravager including the late Angus Scrimm (his last role as the creepy Tall Man), Reggie Bannister (as Reggie), A. Michael Baldwin (as Michael), Bill Thornbury (as Jody Pearson) and Gloria Lynn Henry (as Rocky). The film centers on Reggie’s confusion of dream sequences and reality as he’s often seen with Michael in different situations such as a post-apocalyptic setting or in a park or hospital war. Throughout the middle of the movie I wasn’t sure what was to be believed in the realm of the story, but it certainly wasn’t boring. In fact, I was completely engrossed trying to figure it out! It’s hard to believe that a horror movie could make one think, but Phantasm: Ravager did just that. From Reggie chasing the Tall Man throughout this dimension and what was most likely hell, this is one weird, wild and campy ride. It didn’t fall into the camp of say Army of Darkness but it didn’t keep things entirely serious either. I couldn’t help thinking that the Tall Man’s army of minions were evil versions of the swarmy Jawas from Star Wars . While Phantasm: Ravager lacks some of the disturbing aspects of the original film, it stays true to the story and feel of the original. Some of the battles with the flying silver spheres are pretty intense. When the first film was released in 1979, it was certainly like nothing that had ever been seen before, so the shock that was there then, isn’t there now, but that’s understandable. Original creator, writer and director of the installments (except for this one) Don Coscarelli is heavily involved with Ravager and it’s safe to say long time fans of the series won’t be disappointed. It’s rumored this will be the final installment and while other movies turned into franchises, the Phantasm series went for quality rather than quantity. If you’re curious about Phantasm, watch them in order starting with the first, which is on my list of things to do. See the preview HERE.