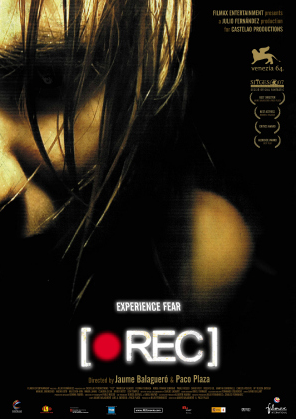 REC is a Spanish handheld footage horror movie. While recording a news broadcast a reporter and a group of people are quarantined in an apartment building that has been plagued by an unknown disease that turns your average person into a cannibalistic freak. The mysterious outbreak leaves the victims no possible way to escape while they are attacked and eaten one by one. REC takes your average zombie movie and transforms it into something much more disturbing. The informal use of directing adds an element of authenticity building realism and accountability between the characters and the audience. All together REC is a well composed horror movie that brings a new aspect to the typical zombie movie smothered in an abundance of distress, paranoia, and the most terrifying; the UNKNOWN. REC has most certainly left a mark in the horror movie spectrum – just enough to have an American remake titled Quarantine.