Home FEATURE The Psyche Of A Horror Fan

The Psyche Of A Horror Fan 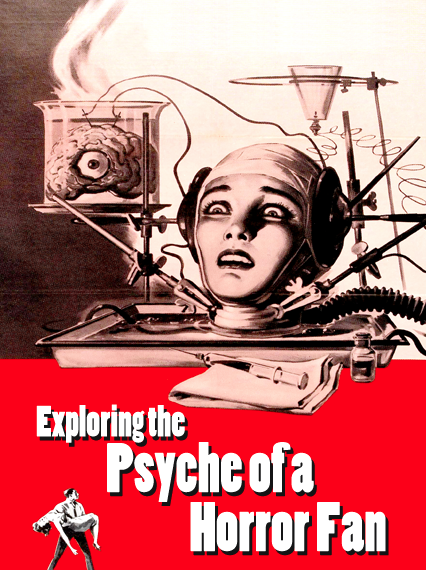 As a fan of all things horror I have lately been asking myself, what is it about the horror genre that I really enjoy, why am I so drawn to it and is watching horror films bad for me? So to answer my own question, I started my quest for an answer with a quick Google search on the topic and found a sleuth of articles, each with different theories as to why our brains crave a good horror film. After reading a few articles I arrived at the conclusion that there really is no answer, so instead I decided to analyze some of the theories as they applied to me. So, in no way is the intention of this article to provide a complete summary on the subject or present all possible theories.

So, are horror films unhealthy because of the stress they cause, as studies might suggest? A study at Purdue University  found that those who viewed horrific images experienced sweaty palms, drop in skin temperature by several degrees, a spike in blood pressure, muscle tension and an increase in heartbeats by as much as 15 beats per minute. As someone who was introduced into the horror genre at an early age with the folklore tales of La Lorrona and El Cuqui and not to mention a screening of the The Exorcist at a very young age (save your parental judgment), I can say that I have definitely experienced these symptoms from time to time. But are the symptoms long lasting?  It’s hard to say, but as someone with a clean bill of health and years and years of obsessing over horror films I can’t see the long lasting harm, but my psyche may be a different story.

The director of the Center for Communication Research at the University of Wisconsin, Madison, Joanne Cantor, PhD postulates that horror films can leave “negative trace” even in the most well adjusted adult. While some movies may keep me up for a couple of nights, I can honestly say that they don’t generate negative or hostile emotions as some research suggests. While I can certainly say that I have memorized scenes from some of my favorite horror films and if a movie really gets to me I will definitely think about it that night, but these films honestly have not made me a negative or hostile person. So, are they unhealthy? Should they be avoided? Doesn’t the news also illustrate the horrific capabilities of mankind?

But why do we watch them? What draws us to them? Is it symbolic catharsis as Stephen King suggests? Catharsis is the idea that watching horror films is a way for us to purge our negative emotions or relieve pent up aggression. So, are we horror film fans negative or angry people? Or is that we enjoy the killing of young couples having sex by a man wearing a hockey mask because we believe they deserve it, as the “Dispositional Alignment Theory” might explain. Or is it that you and I fall within the category of people who have a tremendous need for stimulation and excitement as Stuart Fischoff, professor emeritus of psychology at California State University, Los Angeles explains.

It’s hard to say what drives our obsession with the horror genre and each one of us likely has a different motive. For me, I would like to agree with Dr. Dolf Zillman’s Excitation Transfer Theory (ETT), which states “negative feelings created by horror movies actually intensify the positive feelings” and would like to think that we are all much happier people due to the years spent in front of the scream screen. If anything, horror movies can be a survival guide as to what not to do if you are ever chased by a man wearing a hockey mask.